Sweet Business Catalyst can be obtained in strikes or in the Crucible. To unlock its upgrade, the player has to get multikills with this weapon.

The Catalyst adds the Serious Business perk to this weapon and Masterworks it.

"Hope you're happy!" That's all I remember hearin' afore she ran out in front of us. It was like somethin' out of a pre-Golden Age war flick, you know, where the hero's bud goes out in a blaze of glory so their death can be rightly avenged. Only she didn't die. They did. The weapon reeled like it was bein' held by a child doin' a pee-pee dance, aimin' at nothin' and hittin' everythin'. Dem spiders skittered for their lives. When she stopped, nothin' was moving. She saved us.

I sidled up to her, real slow, checking out the piece and all I could do was sputter, "That there, that's some... sweet business." She looked me over cold, lowered the gun and said, "You ain't gotta tell me." 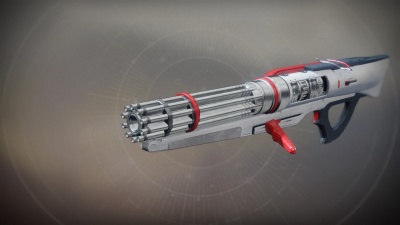