Thunderlord is an Exotic Weapon.

Thunderlord Catalyst can be found by completing strikes, Crucible and Gambit matches. Its upgrade is unlocked by defeating 500 enemies with Thunderlord.

Two they were, artist and scientist. Music flowed in their souls and rained from their lips.
Not weapons of war they made, but instruments of peace.

The thunder fell, and they were cast apart. Their love was sundered as the world collapsed.
They sang in pain and sought to reunite, but crimson eyes glowed in the dark. Their union was not to be.

He held death in his hands. Stars burned in his footsteps.
In her, the conflagration was reborn, the funeral pyre lit.

And so forever after, their love fuels death. Their last words, a curse and a cry.
Their names are now lost, but their love will not die. 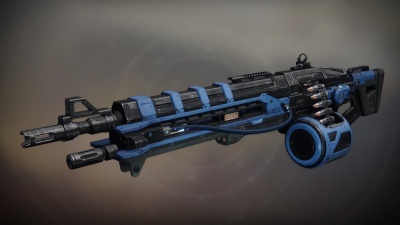