Detailed explanation on how to acquire Reed's Regret

"Trust me." —Savathûn as Osiris

A ceiling light flickers to life with a buzzing click, radiating a florescent pink glow. Moths scatter among the racks of weapons mounted on the walls.

Reed-7 ducks into the room, barely able to shut the door behind him. The space is little more than a closet: an arms locker stuffed to the ceiling with a collection of weapons. His hip brushes past a workbench, where a black-and-gold-plated fusion rifle marked with the Eye of Osiris rests.

He sinks into the seat at the workbench, shoulders slouched forward. The chair groans in protest under his weight. There are notes scrawled on loose papers around the fusion rifle, all in his friend Shayura's handwriting. A fine layer of dust covers everything.

Reed turns the fusion rifle over in his hands. He remembers when Saint-14 gave this to Shayura for her accomplishments in the Trials. He remembers a few months later when Shayura had a breakdown during a match and nearly killed another Guardian. He remembers the fallout. The anger. The pain.

"Do not worry for Shayura," Osiris had told him. Reed can still hear his voice haunting the back of his mind. "I am no stranger to these kinds of traumas. I can look after her. Guide her."

"Show her the way back to clarity." 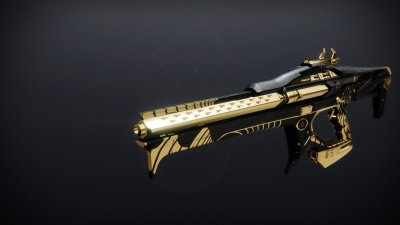 
Do Not Sell My Personal Information
Retrieved from "https://d2.destinygamewiki.com/mediawiki/index.php?title=Reed%27s_Regret&oldid=100127"
Categories: