Rat King is an Exotic Sidearm.

Rat King Catalyst can be obtained by completing Heroic or Nightfall strikes. Its upgrade is unlocked by having a member of the player's fireteam defeat enemies with this weapon.

The Catalyst adds the Infestation perk to this weapon and Masterworks it.

The stories are passed from child to child, whispered in the streets and on the playground like any good legend. "Don't ever venture beyond the wall and sight of the Tower," parents warn, citing these cautionary tales that speak of the boy's many deaths. Exposure. Hunger. Sickness. Cutthroats. Living nightmares. And on. And on. The children, however, have their own truths. To them, the boy never died. They call him the Rat King. The children believe he leads the forgotten among them out of the City on grand adventures. They say he and his misfit army saved the world. But children say many things, and the Vanguard maintains their official stance: there is no Rat King and his army never existed. That's what the elders believe. I choose to believe otherwise. 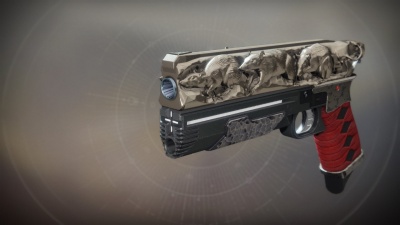 
Do Not Sell My Personal Information
Retrieved from "https://d2.destinygamewiki.com/mediawiki/index.php?title=Rat_King&oldid=89242"
Categories: