Hawkmoon is an Exotic Hand Cannon.

Hawkmoon Catalyst can be obtained by completing the Harbinger mission. To unlock its upgrade, the player has to defeat enemies with this weapon.

The Catalyst adds the Hunter's Trance perk to this weapon and Masterworks it.

Season of the Hunt

During Season of the Hunt, Hawkmoon could be obtained by completing the quests As the Crow Flies and Let Loose Thy Talons. This version of Hawkmoon would have the Transformative trait, which has no effect, in place of a weapon trait. Completing the Harbinger activity would reward the player with another copy of Hawkmoon, with randomly rolled perks, as well as the Hawkmoon Catalyst. A new copy of Hawkmoon could be acquired from Harbinger once per weekly reset.

Upon the release of The Witch Queen, the Season of the Hunt content, including Harbinger, was removed from the game. Hawkmoon now appears in Xûr's inventory every weekend, with randomly rolled perks. The Hawkmoon Catalyst now has a chance to drop when completing Vanguard, Crucible, or Gambit activities.

The Crow is so carefree in his ignorance. The bonfire's glow lights up his pale features and I am drawn to the hope in his gold eyes. Where is the despairing child I anticipated?

He drinks from an open bottle of wine against the recommendation of his Ghost. The Guardian encourages him and they are laughing. This celebration is maddening; neither have reason to be so jubilant. Their world is ending and they thrash like dying creatures in the final light of collapsing stars. They do not seem to acknowledge the futility of their existence, the impermanence of it in the face of cosmic annihilation.

Now the Guardian is drinking, standing close to the fire. Their Ghost, too, encourages them not to partake. They poison themselves for the enjoyment of it.

I am reminded of my sisters. Of moments spent by lapping shores, gazing up at infinite stars full of possibilities and wonder. I am left yearning.

I do not understand it. I do not want it.

They are celebrating their victory over the Taken. The Crow is making a gun shape with his hand, swinging the nearly empty bottle of wine around in the other like a Sword. The Guardian looks pensive, sitting on a rock by the fire, contemplating the secret they are keeping. The Crow notices, but tries not to show it. He wants the Guardian's spirits to be lifted. He wants to be supportive, so that they may share in their triumphs together.

I do not want it.

The fire has nearly died. The Crow fell over and cannot stand, though he insists he is fine. The Guardian is turning the embers with the tip of their Sword. The Ghosts are talking to one another in quiet conspiracy. The celebration has ended, but I can sense their emotions are mixed: complex and myriad things, when a simple, singular focus would suffice.

There is a growing kinship here. Against better judgment. 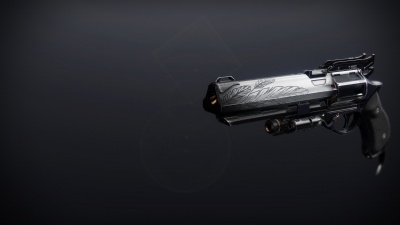