Detailed explanation on how to acquire Sol Pariah 6

Osiris stood at the far end of the Underwatch, his back to her.

Sagira turned. He did not.

"I'm surprised you came alone. Have you finally learned confidence?"

"Yes." Ikora clenched her fists, then released them. "Not from you."

He crossed his hands behind his back. "I know why you're here."

"This meeting was prophesied. As is my impending banishment."

"Then you had ample warning."

"This is ridiculous!" Sagira snapped. "We're at war. Osiris does what you all are too scared to do, and you banish him? How're you gonna win against the Darkness without him?"

Osiris held up a hand to silence her.

"Ikora knows," he said. "She pretends otherwise, but she knows."

"Winning by your terms is no victory." Ikora's hands were fists again. She unclenched them. "Goodbye, Osiris." 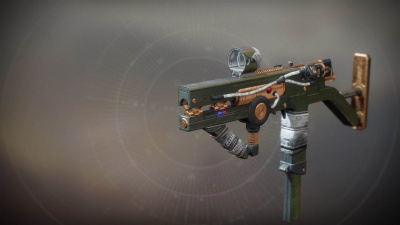 
Do Not Sell My Personal Information
Retrieved from "https://d2.destinygamewiki.com/mediawiki/index.php?title=Sol_Pariah_6&oldid=62956"
Categories: