From Destiny 2 Wiki
Jump to: navigation, search
"bursts(14body)" is not declared as a valid unit of measurement for this property.

The Catalyst adds the Full Auto Trigger System perk to this weapon and Masterworks it.

"What you hold was once an beacon. We came out of the shadows seeking those willing to join our search. We staged the trials in his name. It was once a reward for the chosen few— the ones who persevered when all seemed lost."

"It was forged as an testament to his resolve, to seek answers where no one else cared to look and to continue down the path so many fell blazing. In your hand is proof that those who earned it's firepower never gave up and never lost their way. You may not know the legend of Osiris or ever dared our trials, but should we call on you, will you honor the heralds who earned this weapon's honor and continue the hunt?" 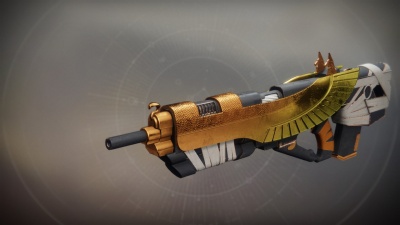 Do Not Sell My Personal Information
Retrieved from "https://d2.destinygamewiki.com/mediawiki/index.php?title=Vigilance_Wing&oldid=70404"
Categories: