Sojourner's Tale is a Legendary Shotgun.

Home is just over the horizon.

The pipes are silent.

Ether production is paused during batch loading, and in that interstitial time, Spider's lair feels like a tomb. Every creak and groan of his throne becomes excruciatingly pronounced. Spider reclines against one arm, rolling a dead Ghost's shell in one hand, scraping a clawed finger across its gray, lifeless eye. The arrival of a trusted associate pulls Spider from his thoughts.

"Avrok," Spider bellows, turning his attention to the armored Eliksni striding through the doorway, "what did you find?"

Avrok approaches Spider's throne, wringing his hands together anxiously. "Our thief, my lord."

Spider leans forward with a groan of the cables suspending his throne. "And what did you do to them?" he asks in greedy anticipation. That, however, is where Avrok falters.

"I did not… catch them, my lord," Avrok humbly answers, his much smaller frame eclipsed in Spider's shadow. "But I have a name."

"Out with it," Spider grouses, falling back against his throne with deflated interest.

Spider's blood turns to fire. His grip tightens on that dead Ghost so hard its shell cracks. Spider continues squeezing it until the glass eye completely pops.

Then he takes a moment to compose himself.

"Our little bird, come home to the nest so soon? Tell me everything."

"He was able to infiltrate the storehouse," Avrok explains, "and coerced a team of laborers to offload cargo promised to the empress onto a Skiff, which he then… stole. Along with a cache of your more—ah—personal belongings, among which was the quantum opal."

Avrok shrinks lower, lower, lower. "The supplies were delivered to Mithrax. In your name. As a gift."

"And the workers?" Spider growls.

"They are gone?" Avrok doesn't mean to make it sound like a question, and regrets taking the tone immediately.

"They…" Avrok takes a small step back from Spider's throne. "Left." He clenches his jaws. "With the Crow."

The Ether pipes begin to hum and rattle as a new batch begins production elsewhere in the complex. The noises rise in intensity, turning into the familiar hissing wail that joins with the uncomfortable sound of Spider. Laughing.

The Baron of the Shore throws his dead Ghost at Avrok who ducks away from it, covering his head with his hands.

"He's taking them to Mithrax," Spider says between fitful chuckles and wheezing coughs. "He steals—from me—and gives it to the House of Light? Unbelievable." Though behind the laughter and coughs, there is a hint of appreciation in his tone. "The kid's grown a spine."

"There is," Avrok starts, offering Spider a folded piece of paper, "one more thing. He left this behind." Spider's seal is scribbled on one side. "For you."

As Spider unfolds the note, Avrok creeps further away from the throne. Inside is nothing more than a crude drawing and a rude missive.

The pipes are howling. 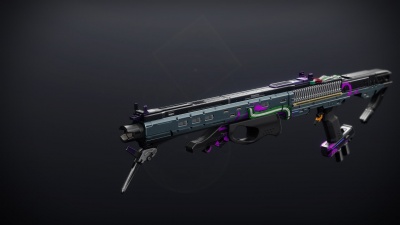