From Destiny 2 Wiki
Jump to: navigation, search
Riiswalker is a Legendary Shotgun.

Detailed explanation on how to acquire Riiswalker

"No. I will not allow a Fallen to fight in the Banner, that right is reserved for Guardians alone. But if you insist, I may allow a Guardian to carry a Fallen-forged weapon into battle. You are a weaponsmith, are you not?" —Lord Saladin to an Unknown Eliksni

A hurled bottle strikes an Eliksni in the head, sending him staggering to the side in a crowded street. Glass glitters on the ground. People gathered in a semicircle around him shout invectives and slurs, as he bleeds midnight blue from a deep cut in his brow. He has nowhere to run, cornered between a neon-lit club pulsing with the bass beats of rhythmic music and an alley blocked off by rubble left over from the Red War.

"Please, no harm. Vriiksis friend!" he cries, two hands clutching his head, another held out flat as if it would ward the crowd off. "Looking for brother—missing. Please!"

The crowd does not care, and they continue to work themselves up into a fervor. Lakshmi-2's words fill their mouths, many of them too young or too naïve to realize it. Vriiksis can't understand so many unfamiliar languages shouted at him at once, but he understands the tone of violence well. His posture says everything—the fear in his eyes carries additional nuance. He fears what happened to his brother. Hate begins to take root in his heart.

A foundry worker steps out of the crowd, threateningly racking a round into a Shotgun. He aims down at the Eliksni, hands trembling. "You want to ask about family?!" the Human yells. Vriiksis does not know what he's talking about. "Your people kidnapped my sister! She was running supplies from Earth to Titan. You raided it!"

"Vriiksis does not—" He is cut off by a blast from the Shotgun that pulverizes the street beside him. Vriiksis crumples to his knees and cowers. "Please," he says, and in the same motion, picks up a broken piece of the bottle he'd been hit with earlier to defend himself.

The crowd screams in outrage.

When the foundry worker advances on Vriiksis and racks another round into the Shotgun, there is a sudden cold snap that fills the air with mist. The Shotgun flash freezes, shatters like glass, and scatters into pieces of blue-black Stasis. The worker recoils, clutching his half-frozen arm, screaming.

Vriiksis sees the crowd part behind his attacker, and a Hunter clad in black and gold with luminous markings on her armor strides toward them both. Darkness coalesces around her hand. Stasis crystals drift like tiny moons around her.

"That's enough!" Aisha shouts. "You should all be ashamed of yourselves! Look at you!"

Aisha grabs the injured foundry worker by the collar with her free hand and shoves him back into the crowd. "Clear out of here before I clear you out! Now!" Wind swirls around Aisha's feet, kicking up crystalline debris in whirling threads of Darkness. The crowd recedes like a violent tide, some tripping over others in their haste to flee.

As the crowd disperses, Aisha dismisses the sickle of Stasis, and the swirling wind at her feet fades as well. She turns, looking at Vriiksis and offers a hand out to him. "I'm sorry," she says with a tightness in her voice. He cannot see her expression behind the façade of her helmet.

Vriiksis does not take the offered hand. His eyes show the same fear. The same hate.

"It's okay," Aisha says slowly, offering her hand again. "You're safe now, they're—"

"Not safe," Vriiksis snaps at Aisha, his eyes dipping down to her hand and then back up to her helm. "You are just like Eramis. Mind-poisoned."

Aisha's breath hitches in the back of her throat, and she slowly lowers the offered hand, closing gloved fingers into a briefly formed fist. "You're hurt. At least let me escort you to a medical…" Her voice trails off. Vriiksis is already backing down an alley, blue eyes locked on her.

She feels a weight on her shoulders, in her heart.

The Eliksni disappears into the shadows, leaving Aisha alone under an endless night's sky. 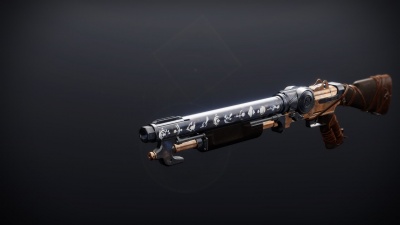