Devil's Ruin is an Exotic Sidearm.

"There is a reason we fight. It's not simply the thrill of battle. There are those who depend on us to stand up, hold the line, and defend what we hold dear. The battle for Twilight Gap remains the hallmark for our fortitude and a prominent reminder that nothing we do is easy.

"I recall Shaxx defiantly ignoring Saladin's orders to fall back, driving his fireteam to a final push on the wall of the Last City. It ended up providing the momentum we needed to save the City, but also splintered bonds between the Titans. Perhaps I can help suture these wounds, now that I have returned.

"Even so, our memories are flooded by moments of pain, duress, and strife. Use them. Wield them. Channel them through you.

"Carry a piece of the battle with you.

"While this will never replace the mighty Gjallarhorns of old, glory comes in all sizes, and we can still celebrate the victory at the Gap with munitions such as these. It is more than a gun. It is a symbol. Each component of this weapon represents a sacrifice made for the greater good. May it bring you the strength to prevail when all looks lost.

"Should the City ever come under threat again, you'll be ready." 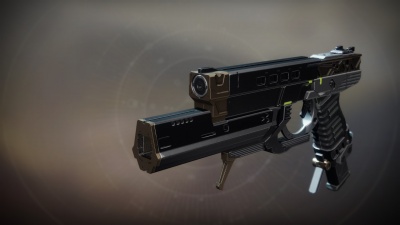