Tarrabah is an Exotic Submachine Gun.

The world is very big again.

It used to be small. I know because I was born inside its commwire-satellite-datawave skeleton.

But even before that, before the Traveler wove us into a tapestry of peculiar threads, this was a planet of big, big worlds.

Many of those worlds were lost in a collapse, but not the one you're thinking of. Before the great Collapse, there was another. A longer, slower, bitterer collapse.

Some things survive. Names upon rusted signs, phrases in impervious microfiche. As other Guardians save humans, I save words. I save stories.

That is my mission, here on the shores of the Hawkesbury Sea. I surface the survivors. The sweet-voiced koodelong. The swift gangurru. The sharp-fanged tarrabah.

It's a mission the Traveler started. After all, she surfaced me. 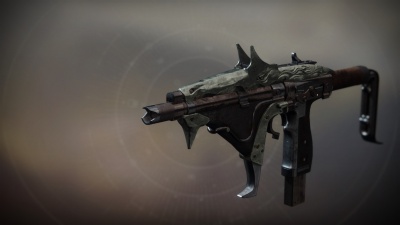