Lord of Wolves is an Exotic Shotgun.

Lord of Wolves Catalyst can be obtained by completing strikes, Gambit, and Crucible activities. To unlock its upgrade, the player has to defeat enemies with this weapon.

The Catalyst adds the Fang and Claw perk to this weapon and Masterworks it.

"Why did they call themselves Wolves?" the Hunter asks. "You guys don't have any wolves on your home world, do you?"

"Nama," the Captain replies. He has perched on a rusted-out Skiff. He scans the horizon, trying to remember the way to the crypt.

"Yeah," the Warlock chimes in. "I'd never even heard of wolves 'til I went to the Iron Temple."

The Captain cocks his head in a way that makes him look very like a squat, hulking owl. "Why Eliksni accept name 'Fallen'? Why Wolves accept name 'Wolves'? Why Misraaks is now," he grimaces as he mimes their accents, showing his serrated teeth, "Miff-racks?" He rises in one fluid motion and stands at his full height. "Why speak Guardian way instead Eliksni? Docked things do not word themselves."

He hops down, brushing past the Hunter and the Warlock with the rippling strength of a hunting tiger. "House of Wolves, they been Mraskilaasan. Gentle weavers. Come. I know the way now." 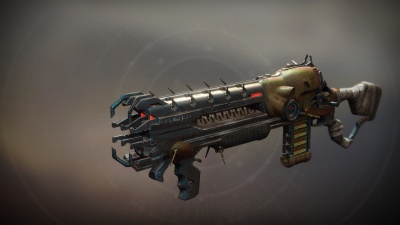 Do Not Sell My Personal Information
Retrieved from "https://d2.destinygamewiki.com/mediawiki/index.php?title=Lord_of_Wolves&oldid=70514"
Categories: