Grand Overture Catalyst is obtained by completing the Heavy Does It quest. Its upgrade is unlocked by defeating enemies with this weapon.

It's not over until the vast red artificial intelligence sings.

"So. You're the new guy." Ana Bray cracks a half smile. "Can't be worse than the last Psions that Red and I dealt with." She impatiently taps her heel on her workshop bench as the Psion hurriedly checks linkages and nodes on the neural coupling device around her head.

Words and images skip across Ana's mind like stones. "Remain calm. Even though you are defenseless, I do not possess a starship." A sound resembling laughter follows.

"Funny." Ana chuckles impatiently. "Okay! I've been setting this up for months. Are you done with the safety checks?"

Jinju flies by Ana and runs a scan over the engram. "Be nice."

A digital timepiece drains toward zero while the Psion inundates her mind with questions.

"My Light, Splicer tech, brain tubes. Yeah, I got it," Ana says. "Plug my brain into Red already and let's do this." Her voice quickens with excitement. The Psion finishes linking cables to a Splicer-tech receptacle housing Rasputin's engram and gives Ana an awkward thumb pointing up.

The Psion forms an interlocking image in her mind: a tangle of wires. Slowly, her perspective sifts through them and stops at a radiant center. She hears the words, 'Forgotten vestige, made remembered.'

Ana blinks. She stands in a vast thicket of thorn and rot. A warmth radiates from deep within the thicket.

Ana blinks. She presses through bramble as barbs draw blood. Her sense of self wavers. She finds her grip on a searing-hot spike, shifting her senses red like an adrenal rush.

Ana blinks. She kneels at the spike and rips it from the ground. A Valkyrie javelin is in her grasp.

Ana blinks. The thorned vines around her recoil and wither in the heat. She feels something within the javelin, faint and weak, but alive. 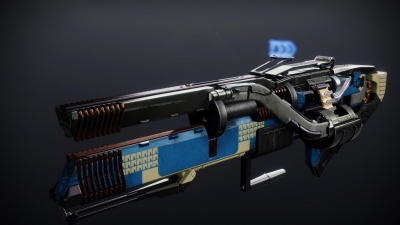