Wavesplitter is an Exotic Trace Rifle.

From the makers of the Coldheart comes the latest in breakthrough City Age technology: the Wavesplitter. Here are the three most frequently asked questions we get about our revolutionary weaponized sound system.

Q: If the Wavesplitter fires sound waves, does it need ammo packs?

A: The Wavesplitter does need ammo packs, but the onboard matter transmuter turns that ammo into electrical energy that powers the waveform emitter.

Q: What does it sound like when you're hit by it?

Q: Can the Wavesplitter be used as a musical instrument?

A: The Wavesplitter was not designed to be a musical instrument. That said, we at Omolon are in the business of giving Guardians options, not taking them away. 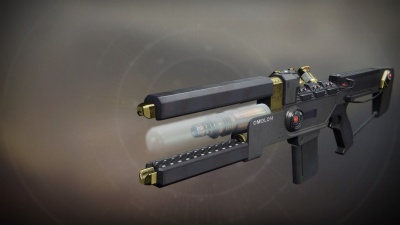