Tractor Cannon is an Exotic Shotgun.

Tractor Cannon Catalyst can be obtained by defeating non-Guardian enemies anywhere in the system. To unlock its upgrade, the player has to defeat enemies with this weapon.

Chioma Esi met Maya in their undergraduate gym. They got into an argument about deadlifting: was it necessary, was it practical, why was Chioma making so much noise? Maya Sundaresh just couldn't stand the notion that some things were done for their own sake, not because they had any use.

Decades later they joined the Ishtar Collective on Venus to study the enigmatic ruins unearthed by the Traveler's terraforming. The first time it happened—Vex code leaping across an airgap, surfing the quantum vacuum from simulation to reality, infecting a utility frame—Chioma pulled an alarm while Maya tried to grab the precious frame with a cargo-grade gravity grapple. She couldn't lift the grapple. Chioma grabbed it, pinned the frame to the wall, and won the argument. 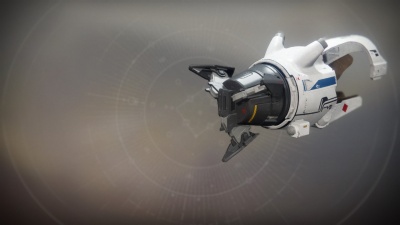 Do Not Sell My Personal Information
Retrieved from "https://d2.destinygamewiki.com/mediawiki/index.php?title=Tractor_Cannon&oldid=70673"
Categories: