The Queenbreaker is an Exotic Linear Fusion Rifle.

Three cloaked figures trek through a cave on a windswept asteroid. As they walk, they joke. They tell stories. They are a fireteam.

"After Cybele," the Warlock says, "the Wolves bowed. Some became the Queen's bodyguards. Then, Skolas—"

"Whoa, whoa, whoa. How? Why?" The Hunter frowns. "Why trust enemies with your life?" A pause. "No offense, buddy."

The Captain shrugs: none taken. "Eia. Strange to do. But Eliksni... we been breathe-always love for honor. New promise not unmake an old. Wolves would been follow Marakel forever if Skolas does not appear again."

The passage widens, and they find a hidden door veneered with amethyst. The Captain lays a hand on it, bows his head. The Hunter and the Warlock fall back respectfully. After a time, the Warlock ventures, "Mithrax?"

The Captain turns. "Wolves rebel. Now, Wolves extinct. This where-live mine-things scatter must end. I will Kell the mind-open Eliksni. No spider-tricks. No loyal-lies. Variisis truths. We fight for Great Machine together." 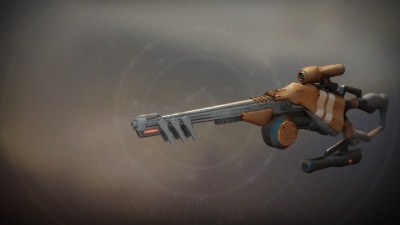 
Do Not Sell My Personal Information
Retrieved from "https://d2.destinygamewiki.com/mediawiki/index.php?title=The_Queenbreaker&oldid=70460"
Categories: