The Fourth Horseman is an Exotic Shotgun.

The Fourth Horseman Catalyst can be obtained in Seraph Bunkers, Seraph Tower, or in Legendary Lost Sectors. To unlock its upgrade, the player has to defeat enemies with this weapon.

The Catalyst adds the And its name was Death perk to this weapon and Masterworks it.

"There's a reason the Cabal want to take this weapon from us.

"When you hold the Fourth Horseman in your hands, you bring the storm. You instill fear by commanding the thunder and firing off rounds with lightning speed. Tear through your enemies like light piercing through clouds after the rain subsides.

"You are a force of nature. Unstoppable. Unpredictable. Undeniable.

"Don't forget what the Fourth Horseman brings, after all." 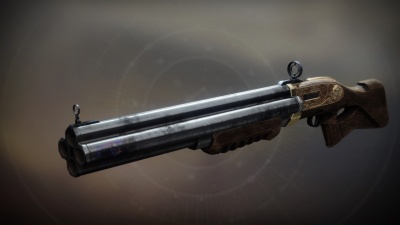 
Do Not Sell My Personal Information
Retrieved from "https://d2.destinygamewiki.com/mediawiki/index.php?title=The_Fourth_Horseman&oldid=86835"
Categories: