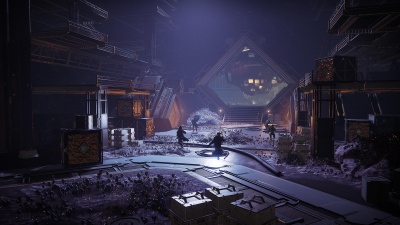 Seraph Bunker: the Moon
Seraph Bunkers are new areas introduced in the Season of the Worthy.

Each Seraph Bunker contains a Rasputin terminal, through which players can get his bounties, turn in chipsets in exchange for a reward Engram, and buy Bunker upgrades and bonuses. Bounties are constantly available, but the rest of Rasputin's offers has to be unlocked by completing a daily mission which involves clearing the deepest parts of the Bunker from enemies, including several Champions and a boss, and interacting with a terminal at the end.

After clearing a Bunker, players can access its current Legendary Lost Sector through a beacon in the main room. Each Bunker has access to three Lost Sectors, but only one of them is available and they rotate daily. Legendary Lost Sectors work like Heroic Adventures, they also contain Champions, the Match Game modifier, and use a score system for some reason. There are two chests at the end of each Sector, one of them has to be unlocked with an Encrypted Warmind Bit.

Both Seraph Bunkers and Legendary Lost Sectors also contain spawners for Heavy Frames and Valkyrie javelins, they can be used if the player invests into respective upgrades.


Do Not Sell My Personal Information
Retrieved from "https://d2.destinygamewiki.com/mediawiki/index.php?title=Seraph_Bunker&oldid=73580"
Category: