From Destiny 2 Wiki
Jump to: navigation, search
The Conqueror 2 is a Legendary Submachine Gun.

Detailed explanation on how to acquire The Conqueror 2

Excerpt from a letter written by Lord Shaxx to the Speaker, dated three years ago:

I do not appreciate wasting time that should be spent forging Guardians into their best selves. But since you have seen fit to launch an investigation into my beliefs, I will explain them as simply as I can for you.

I am no "follower" of anything. I believe thanatology is just an excuse for insomnia and that Ahamkaras are for cheaters. I find the Acataleptic belief that Darkness is incomprehensible to be pessimistic nihilism, and its opposite-the Osirian position that Darkness must be understood-to be misanthropic narcissism.

But I will also take good ideas where I can get them. And Osiris's belief that Guardian minds and bodies can be sharpened as one sharpens a sword is a damn good idea. You've seen the results in the Crucible. Do I really have to say any more? 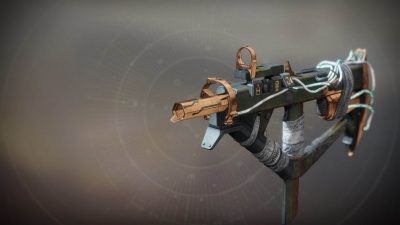