The Mountaintop is a Legendary Grenade Launcher.

[Fireteam leaders: Do not advance on the Wall. Fall back to the Ridgeback District.]

Shaxx freezes with a Vandal's windpipe in his fist. He waits for Saladin to justify the strategy.

[I repeat: All teams rally at the Ridgeback District. Do NOT advance. The City is lost.]

Shaxx drops the Vandal, then empties the rest of his clip into a Captain. He and his fireteam are running on fumes. The dead, Fallen and Guardian alike, litter the Twilight Gap.

He risks a look over his shoulder at their home, the place they call the Last Safe City. Not burning. Not yet. Gritting his teeth, he reloads.

[Shaxx, your orders are to retreat.]

He sees a gap in the onslaught of invaders and gestures to the others. "Nkechi! Take Abdi and Truce. Liu Feng, with me! Bray! Cover us!"

[This battlefield is not your stage, Shaxx! This is not about glory!]

[Shaxx! For the final time: Fall! Back!]

As the six of them crest the Wall, Shaxx cuts the feed. 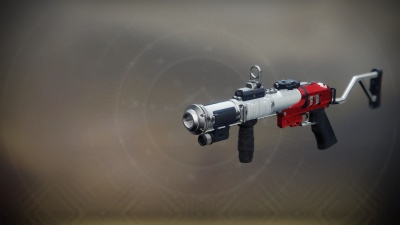