The Prospector is an Exotic Grenade Launcher.

Prospector Catalyst can be obtained by completing Heroic or Nightfall Strikes. To unlock its upgrade, the player has to defeat enemies with this weapon.

"Get your axe and your pick and your shovel and your spine. We're goin' prospectin'."
"What?"
"That. The quote. I don't get it."
"It's an old saying. It's about puttin' in a hard day's work."
"Seems... antiquated."
"How so?"
"My grenade launcher's full auto and goes boom on command. What do I need hand tools for?"
"It's a metaphor. It ain't literal. At least not anymore. Your launcher is your hand tool."
"Ahh. Got it. Good to know." 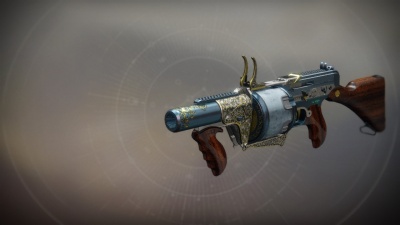 Do Not Sell My Personal Information
Retrieved from "https://d2.destinygamewiki.com/mediawiki/index.php?title=The_Prospector&oldid=70664"
Categories: