The Colony is an Exotic Grenade Launcher.

Colony Catalyst can be obtained by defeating Guardians in the Crucible. To unlock its upgrade, the player has to defeat enemies with this weapon.

Have you ever watched a snake kill something? It's awful. It's so awful. I watched a man die of a terciopelo bite once. Out by the northern wall. I still have nightmares about it.

Anyway, that's where VEIST comes from. The inspiration, I mean. Weapons with all the power of a venomous creature. Plus an onboard AI with that creature's killer instincts.

And now there's the Colony. A grenade launcher packed with fully mobile, AI-controlled insectoid detonators, each one designed with a taste for blood.

We've made some pretty messed-up stuff. You've probably seen it. You know. But we've never made anything like the Colony before. 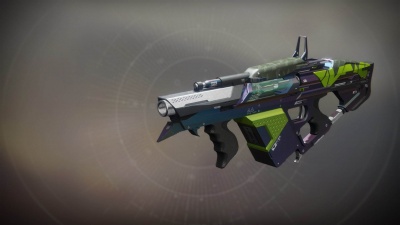 
Do Not Sell My Personal Information
Retrieved from "https://d2.destinygamewiki.com/mediawiki/index.php?title=The_Colony&oldid=70660"
Categories: