Sturm is an Exotic Hand Cannon.

Sturm Catalyst can be obtained by defeating non-Guardian enemies on Nessus. To unlock its upgrade, the player has to defeat enemies with Sturm and Drang while having both weapons equipped.

The Catalyst increases Sturm's range by 18 and handling by 36 and Masterworks it.

"Please! You don't understand. I'm supposed to be on that ship."

The guard smiled at Sigrun with gentle condescension. "That's not possible, ma'am."

She understood why he would believe that; all of the colonists had entered cryo two weeks ago, but she could see the crew waving for pictures. They were awake! She could be awake, too. "I'm supposed to be on that ship," she insisted, leaning around the guard. There was still time. She could find whatever horrible cryo-coffin they'd loaded Victor into; she could kneel before it and beg him to forgive her. He wouldn't hear her but he wasn't gone yet—

"Captain Jacobson!" Sigrun darted past the guard. "I'm a colonist! You can't leave without me!" 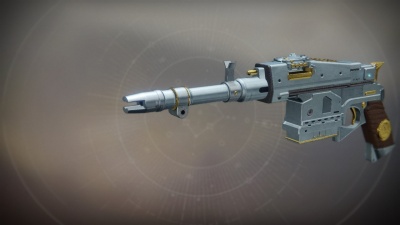 
Do Not Sell My Personal Information
Retrieved from "https://d2.destinygamewiki.com/mediawiki/index.php?title=Sturm&oldid=86802"
Categories: