Cerberus+1 is an Exotic Auto Rifle.

Cerberus+1 Catalyst can be obtained by defeating non-Guardian enemies anywhere in the system. To unlock its upgrade, the player has to defeat enemies with this weapon.

The Catalyst adds the Focused Fire perk to this weapon and Masterworks it.

I had plans for the Photonic Heart.

First I was gonna take it straight to Marcus, gloat for a bit. "Look what I found, told you the rumors were true, how fast d'you think my Sparrow'd go if I swapped my engine out for it…"

Then see what I could get for it in the Bazaar. Not 'cause I wanted to sell it. Just 'cause it'd feel good to know.

Then I was gonna take a little vacation with it to Venus, and THEN I'd figure out what to do with it. At my leisure.

But no. Had to get sucker punched by an asteroid.

Barely made the landing on this dusty spit of Shore. Lost all my weapons in the crash. Heart only survived 'cause I put it in my helmet and buckled it in my seat.

So my Ghost revives me, and there I am in a crater surrounded by fragmentalized auto rifles and a Golden Age microstellar dynamo. Talk about hell.

I started with three barrels. Figured I might as well lean into the hell vibe. Shoulda known that wouldn't have been enough to really min/max with a power source this feisty. Especially once I noticed the coronal containment shield was cracked.

The first time I fired the Cerberus+1 and felt that puppy kick, I knew: plans are overrated. 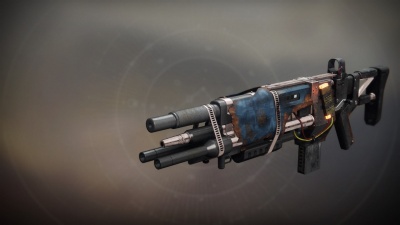 
Do Not Sell My Personal Information
Retrieved from "https://d2.destinygamewiki.com/mediawiki/index.php?title=Cerberus%2B1&oldid=69181"
Categories: