From Destiny 2 Wiki
(Redirected from Eater of Worlds)
Jump to: navigation, search

Leviathan, Eater of Worlds is a Raid Lair in the Leviathan destination, included in Curse of Osiris. The fireteam delves into the heart of the Leviathan to destroy Argos, Planetary Core.

The final boss does not move very much, and has various weak spots that must be destroyed within a time limit. High-damage precision weapons such as Sniper Rifles and Linear Fusion Rifles are effective for the focused fire necessary to disrupt its attacks. Damage buffs such as

Well of Radiance and

Ward of Dawn are viable due to the boss's immobility.

Enemies are stronger and more durable. Revive token is lost upon death. Quantum mines now require 29 ammo to be destroyed.

The Leviathan appears to be accessible. It might pay to explore.

The fireteam is transmatted to the Leviathan's entrance courtyard, proceeding up the first ramp will arrive at a large grey metal gate that will open upon approach. The path downward is fairly long but straightforward, leading to the first challenge: the Leviathan Reactor.

Find a way out of the Leviathan's reactor room. 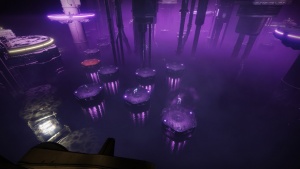 This area is flooded with coolant, but allows passage through a series of platforms that erect sequentially. This path is separated by checkpoints, and will require at least five members to advance. Reaching a checkpoint will set the respawn point at that checkpoint.

Loyalist Psions will spawn on upper catwalks and begin shooting. Another Loyalist squad will also spawn at the next checkpoint, including a Loyalist Incendior.

Section 1 is a straightforward chain. Section 2 has two possible paths that must be taken, one trek enables the path for the other to open. In Section 3 after the seventh platform, the path forks off at the fourth platform for the later members to navigate. This tangent will meet the previous path and lead to the next checkpoint. Section 4 will start to weave the path into itself, maintaining single occupancy is paramount.

Upon completing all of the sections, the fireteam would arrive at a rig at the other end of the room. A

Raid Banner plot is located at the left deck. To begin the encounter, one must approach the hatch in the center. Waves of Loyalists will be deployed via dropship and duct, climaxing with four Major Colossi. Completing this encounter will reward a loot chest, and open a large floor hatch that leads to the next encounter. 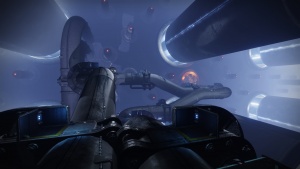 Venture deeper into the Leviathan.

This expansive room has a split path that is intermittently hit every 13s with a large arc blast from the pistons above, killing anything in the room. To shelter from this are walled corners outlined in yellow, laid along the path to the other end of the room. An alarm will sound shortly before the blast.

At the end of the room, there is a long drop that will lead into a cannon chamber. Once the fireteam is inside, the chamber will open and launch players into the core of the Leviathan: a large expansive pitfall with floating terrain. From then on, the cannon will fire for any player that enters at a given time.

The cannon's trajectory will send players falling through floating debris onto the next area. There are seven Vex rings on the way down (2 upper, 3 middle, and 2 lower) that are lighted red, falling through a ring will permanently light it blue. Tripping all seven rings will award a bonus reward chest at the bottom of the fall (Calus grants a gift), which has a notably high chance of awarding an

Exotic Engram. This area is separated from the next by a downward passage of floating rocks, the respawn point for this area goes back at the cannon to allow a player to reattempt their descent. 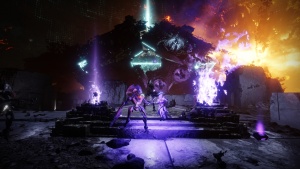 The side of the barrier (shown above) requires 2 Void and 1 Arc Craniums.

The final arena contains the prison of Argos, Planetary Core: a giant construct studded with 18 large sockets. Surrounding the prison are three floating landscapes that each contain two enemy spawn doorways and a set of three braziers in the center. Each set of braziers is attuned to an element: Void (Sphere), Arc (Expanse), and Solar (Grove). Among floating debris that bridges the landscapes are two spawns for a

Vex Cranium that can be deposited into a brazier; each bridge spawns one cranium at a time, with a cooldown for each spawn. 6 sockets are visible facing a landscape—as a shorthand, each of the facings of the prison along a landscape will be referred as a side.

Raid Banner plot is located at Sphere, retrieving a cranium will begin the encounter.

A set of three large crystalline mines will spawn at 55s intervals in the sockets on any one side, filling it up completely before spawning on the clockwise adjacent side. A wave of Goblins will spawn right at the braziers at the same time. The mines are color-coded to Solar (orange), Arc (cyan), and Void (purple). Each mine arms for 72s before charging for 20s, then detonating in a wipe. Enemy waves will continually populate the area.

Destroying a mine will require a charged cranium attuned to the same element. Take a cranium from its spawn and deposit it into a brazier to begin cooking it to full charge, a wave of Goblins and a Minotaur will spawn upon doing so. After 28s, the cranium becomes a

trace rifle with 40 ammo that is able to damage a mine of the same element; this requires 23 ammo at base damage. A charged cranium will despawn after being dropped for some time.

Once all of the mines in their sockets have been defused, the prison would also be fully destroyed, revealing an immunity barrier that is protecting Argos. The phase is complete, rewarding a loot chest. A

Raid Banner plot is located at Sphere, retrieving a cranium will begin the next encounter. 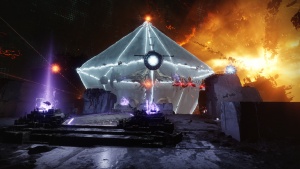 The Craniums are once again used to break the barrier.

The prismatic barrier is a hexagonal bipyramid studded with a ring at every other medial vertex, aligned facing the landscapes. An antenna is situated at all the other vertices except the bottom. A ring will become active and spawn 3 orbs of elemental energy at the adjacent antennas around it. Damaging an orb with a

cranium of the same element will nudge it along the edge towards the ring, where it will disappear. Converging all three orbs into the ring will temporarily lower the side of the barrier for 30s and leave Argos vulnerable to direct fire, an uncoordinated alignment will reset the orbs' positions after 5s from the first orb inserted.

Waves of enemies will continually spawn to disrupt the fireteam, and Argos will occasionally fire his Aeon Maul at a target Guardian. While the barrier is breached, the fireteam gains an Unstable Energy Boost that allows them to deal the most damage to Argos, whom will also retaliate by firing Force Cage and sending Supplicants. Once the barrier closes again, Argos will turn clockwise to the adjacent landscape and begin another energy collection.

Throughout the encounter, Argos has a cooldown timer to trigger the next phase (this will be delayed by a barrier breach). In this phase, all craniums that are not in a brazier will despawn (including those being carried), Argos will turn counterclockwise to the adjacent landscape and the barrier will be replaced by floating platforms at all sides. The callout reads Void energy rips the air, where Argos begins charging Gravity Smasher for 30s that concludes in a wipe. To disrupt this, the fireteam needs to destroy two out of six weak spots that become available: the two lower arms, two shoulders, or two sides of the back. Hitting a weak spot will register as precision damage; the spot will darken from white to pink to red, indicating it's remaining vitality. A weak spot will rapidly regenerate health if left undamaged for a moment.

Successfully destroying two weak spots will stun Argos for 18s before the surroundings revert back to the barrier. Due to the limited number of weak spots available to disrupt Argos's attack, the fireteam essentially has to destroy Argos within four void reading spikes.

After the boss is defeated, Calus transmats the fireteam into the robot room of the Leviathan, rewarding a final chest.

Rewards will drop for a character only once per mode per weekly reset.

*This item is guaranteed to drop, restrictions apply.


Do Not Sell My Personal Information
Retrieved from "https://d2.destinygamewiki.com/mediawiki/index.php?title=Leviathan,_Eater_of_Worlds&oldid=79866"
Categories: