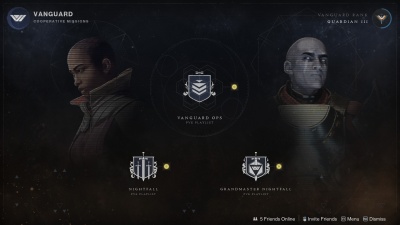 The Vanguard screen in the Director.

Vanguard is an activity category. Its activities can be accessed from the Vanguard icon on the Destinations map in the Director.

Vanguard activities are based around Strikes. These are 3-player PvE activities, where the fireteam will progress through a mission, fighting enemies and completing objectives. The strike will culminate in a boss fight, where defeating the boss will complete the mission and spawn a chest to distribute rewards.

Commander Zavala is the Vanguard vendor, and can be found in the Tower Courtyard. As players complete Vanguard activities, they will gain reputation with Zavala, earning rewards as they increase in rank. At the start of a new Season, these rewards will change, and players' ranks will be automatically reset to 1.

Vanguard Ops is a matchmade playlist containing every strike that is currently available in the game, as well as the Battlegrounds missions. Strikes are chosen at random. Players do not need to own the expansion associated with a strike in order to play it in the playlist. The recommended Power Level for Vanguard Ops is the current Power floor, making the activity accessible to all players.

There are four difficulties to choose from in the main Nightfall activity, with higher difficulties having higher recommended Power Levels, no matchmaking, additional modifiers, and Champion enemies.

A fifth Nightfall difficulty level, Grandmaster, is separate from the main Nightfall activity. It usually becomes available later in the Season, as it has a high recommended Power Level. If all fireteam members die in a Restricted Zone during a Grandmaster Nightfall, they will be sent to orbit, receiving no rewards.

Grandmaster uses the same strike and weapon rotation as the normal Nightfall. However, Grandmaster Nightfalls can drop the Adept version of the weekly Nightfall weapon.

Completing any Vanguard activity will have a chance to drop the current Season's Vanguard playlist weapon. In the next Season, it will be added to the

Vanguard Gear engram and replaced with a different weapon. During the Season of the Seraph, the Vanguard playlist weapon is:

In Nightfall activities, each week will feature a different weapon, with the weapon pool and rotation changing each Season. Higher difficulties will give a greater chance for the weapon to drop. Completing Nightfalls with a Platinum rating, killing all Champions that spawn before the end of the mission, will give the greatest chance at receiving a reward. Completing a Grandmaster Nightfall with a Platinum rating will guarantee an Adept Nightfall weapon to drop.[1]

During each Season, players can increase their rank with Commander Zavala by completing Vanguard activities. Completing activities will also increase the player's Vanguard activity streak, granting increased reputation rewards with each match, up to a maximum streak of 5. The player's current streak can be seen by hovering over the reputation icon on the Vanguard screen in the Director. Completing Crucible, Gambit, or Dares of Eternity activities will reduce the player's Vanguard streak while adding to those activities' streaks. Players can only have a total of 5 streak progress across all four activity types, rebalancing depending on the activities completed.[2]

Rewards can be obtained when certain ranks are reached. Each rank will reward a

Vanguard Gear engram, which can drop items from the newest Vanguard armor set, as well as older Vanguard playlist weapons. Other rewards vary depending on the Season.

Rank can be reset to 1 after rank 16 is completed. Each rank reset will allow weapons obtained from Vanguard activity completions and

Vanguard Gear engrams to drop with additional Traits in the third and fourth perk columns, up to 4 resets.[3] Rank will be automatically reset to 1 at the beginning of the next season, and any unclaimed rewards will be lost.