See also: The Dark Priestess and The Technocrat

The Warrior is the seventh Story Mission from the Beyond Light expansion.

Drop to Asterion Abyss where you'll find yourself in a heated fight battle between Vex and Fallen. Clear them out, and pay special attention to the Abstract Hydra. Summon the sparrow and drop deeper into the cave till you reach Nexus. Eliminate Dregs, Minotaurs, Goblins, and Principle Wyvern. The path forward is shielded, so destroy Vex cube to drop the barrier. Follow the waypoints, defeating Dregs and exploding Shanks along the way. Soon, you will reach a shielded Vex cube and a couple of Vandals. Hit the nearby lighting balls to deal massive damage, and follow the path to the other side of the canyon, from where the cube can be destroyed. Jump down to the arena, where Brig, House Salvation awaits. Clear out the room and head forward to the boss fight.

This fight consists of 3 stages. Phylaks will move to the other area each time you shoot off a third of his health. She is weak against Stasis, so the fight will be easier if you play as Behemoth, Revenant, or Shadebinder. In the beginning, Phylaks will attack you with Stasis and an occasional melee attack. As she moves, the area around you will start to disappear, so you are forced to follow along. Throughout the battle, Phylaks will summon Wretches and similar adds for you to deal with. When you reach the final stage, unleash Super to clear enemies and jump to the platforms on your left. Keep attacking and she will soon be defeated. 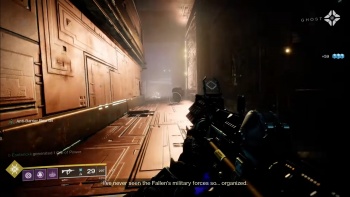 Defeat Fallen
Move through the waves of enemies and drop barriers to proceed to Phylaks.

Phylaks will drop a Splinter of Darkness which you need to give to the Exo Stranger.