"Thanks. Helium reactors still intact. What did you call them?"
"Sunbreakers."
"Hmm. Bad idea. I go around touting that name and those mercs will come out of their caves and I'll have twice the trouble. I've got enough bad blood with those barbarians."
"What?"
"The Sunbreakers, old Titan order, super serious mercenaries, fire hammers? Been in the wilds for decades, and word is they've made a new pact with the City, so there's bound to be more of them."
"It's just a name."
"You tell them that, they'll probably put a bounty on you and try to sacrifice you to their forge. I'll call them Sunbracers."
"Call them what you want. To me they'll always be Sunbreakers." 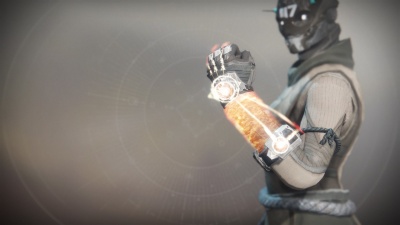 Do Not Sell My Personal Information
Retrieved from "https://d2.destinygamewiki.com/mediawiki/index.php?title=Sunbracers&oldid=66400"
Categories: