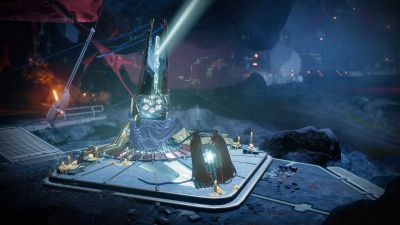 Obelisk:Tangled Shore
The Sundial Obelisks are new vendors in the Season of Dawn.

There are five Obelisks, located on various destinations:

Each Obelisk has to be unlocked through a special quest. First, the player has to collect certain items dropped from certain enemies on the Obelisk destination. Then, they need to defeat enemies with Supers and other abilities, and gather Orbs of Light. The Tower Obelisk requires the player just to collect items from powerful enemies.

Each Obelisk has its own reputation bar, which increases its Resonance Rank and can be filled by turning in Polarized Fractaline. All of them give the same Legendary Timelost Engram as a reward. By increasing an Obelisk's rank, the player unlocks its Obelisk Enhancement buffs, bounties and Dawn Armor Mods.

Each Obelisk offers weekly bounties, which reward the players with Polarized Fractaline, and special Timelost Weapon bounties for The Sundial or Year 1 weapons with randomized perks.

Each Obelisk offers Obelisk Enhancement buffs, which are activated the moment they are bought and work throughout the Season as long as the Obelisk is linked to The Sundial. Two of the buffs have three levels: Uncommon, Rare and Legendary. The other two have only the Legendary level.

The Sundial activity's reward is determined by the Obelisks that are linked to it. Each Obelisk has certain weapons that are offered to the player after The Sundial run, and the player can select which one they will take.

At first, the player can link only one Obelisk and take only one reward. The number of simultaneously linked Obelisks and the amount of items a player can take from The Sundial can be increased by buying buffs from the Obelisks.