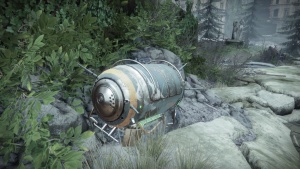 A loot cache found in the EDZ.

Loot Caches are treasure chests that can be found in patrol zones. Their visual designs are based on the various enemy factions in the game. They can be opened without restriction; once opened, anyone can come by and claim their own chest rewards until the chest disappears.

Loot caches can be found in any patrol zone, usually only in public areas where other players can be encountered. Caches spawn in specific locations within sectors. However, the game randomly chooses between these locations when chests are spawned.

Equipping a Tracking Ghost Mod can help find caches by displaying a waypoint when a chest is nearby. These ghost mods include:

Opening a loot cache will reward the following:

The term Loot Caches refers specifically to faction-specific chests which are scattered about the public Sectors of patrol zones.