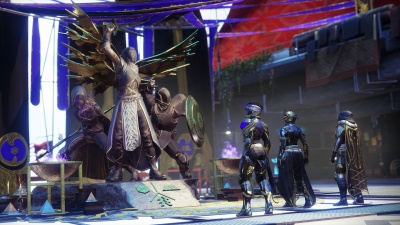 Solstice
The Solstice (previously known as the Solstice of Heroes) is a Live Event in Destiny 2.

The Solstice is a summer event focused on a special armor set. Eva Levante returns to the Tower to offer Solstice bounties, she can be found in the Courtyard near the Statue of Heroes.

All participants receive a Rare set of armor. By completing specified objectives players upgrade their armor first to Legendary quality, and then make it glow. The player has to wear an armor piece to progress its objectives. The next set can be obtained by interacting with the Statue of Heroes while wearing the current set with all objectives completed. White armor glow can be unlocked by upgrading the armor, and elemental glows can be bought in the Eververse. Starting from the Season of Arrivals, Eververse sells Universal Armor Ornament sets, one for each class, and they glow with the element of the player's equipped subclass.

As the player completes their armor sets, they unlock Armor Accelerators from Eva Levante, which increase the progress made towards future Solstice armor objectives.

Each day features an element: Arc, Solar, Void or Stasis. Players get a corresponding buff, which can be checked on the character inspection screen, and enemies in the EAZ take more damage from the daily featured element. Defeating enemies with weapons or abilities of any element makes them drop corresponding orbs. They all can be collected by running over them, but orbs of the daily element give players the Elemental Charge buff. Once a player gains 30 stacks of Elemental Charge, they become Empowered with the featured element for 30 seconds. When Prism is the daily focus, the player charges the element of their equipped subclass.

A special three-player matchmade activity can be accessed from the Tower: the European Aerial Zone, the only source of Solstice Packages, which have to be opened with Solstice Key Fragments and contain Rare and Legendary gear. The EAZ is a floating island that is occupied by the Hive, Fallen or Cabal. Taken enemies spawn occasionally, the major Prismatic one drops an empowerment orb when defeated, which immediately gives Empowerment to the player that runs over it. Shiny yellow crystals also randomly spawn around the EAZ, they can be broken with any weapon and drop orbs of the featured element.

The EAZ activity consists of three stages, the first and the last ones are on a time limit. First, players have to hunt down and kill as many minibosses as they can. When the time expires, a boss spawns in the area, and after it is defeated and its reward chest is looted, several chests spawn in the EAZ as the final stage. The number of chests depends on the amount of the minibosses killed. They are marked on the HUD when they spawn, and only one player has to open a chest for the team to get its contents. The activity ends once all chests are looted or when players run out of time.