Skull of Dire Ahamkara is an Exotic Armor.

What kind of talking skull would address its host that way? A stiff, stuck-up old fossil, not me. Ahamkara: the illusion that one's ego depends on an object, or an idea, or a body. Some people say you should have no ahamkara. Some people say you need to have the right ahamkara. All I know is that YOU are not an illusion. Understand? This world around you, the people you meet—they're a little thin, right? Cardboard and drywall. Cheap theater. Come on, try it out! Say: "I am more real than this." Feels good, doesn't it? "I am the only real person here." Isn't it like their insults and their bullets just went a little... soft?

I came to find you, only you, because you're special. You're from somewhere real. And together we can burn our way back there. Can't we, o player mine? 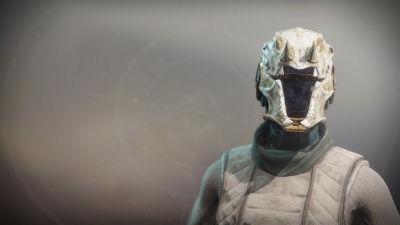 Do Not Sell My Personal Information
Retrieved from "https://d2.destinygamewiki.com/mediawiki/index.php?title=Skull_of_Dire_Ahamkara&oldid=70045"
Categories: