Detailed explanation on how to acquire Iron Forerunner Boots

"Some know the legend. We crossed a burning world with sword in hand, bringing justice and blood." —Lord Saladin

Saladin remembers the simple pleasure of sharing a meal with friends. He remembers Radegast hanging the deer upside down by its hind legs, and how swiftly Perun used her knife to skin it.

He remembers Jolder tending the fire with wood cut by her favorite axe: a mighty thing fashioned from steel and embellished with engravings of laughing wolves. It had been a gift from a blacksmith whose son Jolder effortlessly plucked out of the frozen river several winters before.

"Putting an arrow through its heart is the easiest part," she'd teased him. "Now you get to sit back and watch the rest of us do the real work."

Saladin remembers helping anyway, using Jolder's axe to section off a flat piece of juniper to smoke the meat. He remembers the sound and smell of bubbling fat, and how rich the drippings had tasted when he soaked them in bread.

He remembers Radegast asking him to sing the song taught to them by the people of the blacksmith's village, but agreeing only when Jolder and Perun promised to join in. Their voices rose like wolves in the night and were so raw by morning that none of them could speak.

Saladin remembers all this and more when Zavala tells him Amanda has taken the Crow out to drink in the City's streets. He wonders what song they'll sing, if it's anything like the one he's heard everyone humming lately—even though he hasn't tried it himself. 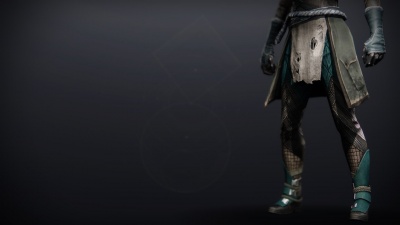