Caliban-8 had the singular misfortune of "winning" the position of Hunter Vanguard in a card game he didn't even play. All he'd done was deal the hand that lost Tallulah Fairwind's bet—and her life—to an Ahamkara.

Not a day went by where he didn't wish he'd cheated. At least then, the wish-dragon might have killed him as well.

Now he sat as the second Hunter Vanguard in the City's history, chained to a desk in the Tower. Responsible for a breed of Guardians notorious for their unwillingness to answer communications or follow directions. Lulah knew how to inspire a sense of camaraderie in them. But Caliban?

He was just a guy who dealt the wrong hand.

Leaning back in his chair, he flipped a Light-heated knife between his fingers and tossed it up into the ceiling. Its molten edge slid into the steel and instantly cooled, stuck alongside the other half dozen blades he'd previously used to deface his office.

It had been a slow afternoon.

A light knock on his door caught his attention. An unassuming figure, robed and masked in white, stood at the entrance to the room.

"Hard at work, I see," remarked the Speaker.

Caliban scoffed as he got to his feet. "Not sure what you expect me to do from behind a desk. You know how Hunters are."

The Speaker nodded, then looked up to the ceiling. "How many knives do you have up your sleeve, Caliban?"

"About that many," he joked, pointing upward.

"Then it seems you must get up and collect them," the Speaker mused. "Much like your Hunters."

Caliban began to reply, but for once, he didn't know what to say. The Speaker turned from the doorway and called out over his shoulder.

"Take your time, Caliban. The desk will be here still when you return." 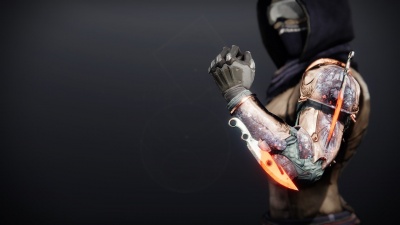