Wings of Sacred Dawn is an Exotic Armor.

The Parable of the Venging Fire, as interpreted by Pujari

A young Warlock travels to her mentor, seeking the truth of the Praxic Fire. A wildfire rages in a valley nearby. Her mentor points to the billowing smoke, saying, "This is the Praxic Fire. Go, and learn what you can."

And the student returns to her teacher, saying, "Master, the fire does not ask, the fire acts. That is the truth."

Her mentor laughs, and the flames leave the sky from the valley and surround the teacher, and the wind blows the smoke away.

The old Warlock, now wreathed in flame with great outstretched wings, says, "The heart of the Praxic Fire is the Warlock. Without the Warlock, fire does not ask or act. Be the fire, or be smoke on the wind."

The cowering student stands, her palms closing into fists. 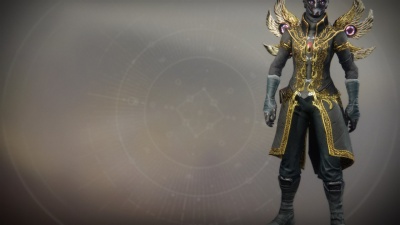 Do Not Sell My Personal Information
Retrieved from "https://d2.destinygamewiki.com/mediawiki/index.php?title=Wings_of_Sacred_Dawn&oldid=66988"
Categories: