Detailed explanation on how to acquire Wild Hunt Vestment

"I've studied the enemies of the Light, and I don't know what lured us to that ruin in Old Chicago and killed all those Guardians. But, I know it was hunting us." —Shayura, Awoken Warlock

The encampment was several days old, formed from a few dirty tents huddled around a handful of unpacked crates and two sealed ones. The entranced Servitor had dimmed, and foul-smelling liquid spilled from punctures and rutted gashes in its plating. Trihn looked the machine over curiously. It was an oddity this far from the Shore, and to be left unprotected was even stranger.

Toppled in the dirt, an Arc spear tip drew her eye to an open case of digging tools, high-tensile strength line, and respirator filters— and just beyond: the wheezing Captain. Trihn scooped the spear from the ground and walked the few short steps to him.

"What name do you go by, cur of Driksys?" Her Eliksni was of the Shore, a crudeform result of the elegant language diluted by Sol-domestic phrases and pronunciations.

The Captain thrashed and rolled onto its back, snapping quills like kindling. It propped itself on rough-hewn fleshy stubs to extend its reach and swiped at her with its single remaining arm. Froth spilled from its cracked mask, and underneath a broken section at the brow-line, a maddened eye fixated on her.

"What's wrong with him?"

Shakto materialized at Trihn's side. "I don't know. Presenting physiology is Fallen, but altered. Something in the Ether?"

"Whatever they called you, your life is mine now." The Lightbearer drove the Arc spear into the Captain's chest with one measured thrust. "We'll keep doing this until he has no subordinates. He'll be forced to deal with us eventually."

Trihn swiped a spent Ether canister from the Captain and held it up to the light. "Shakto."

"Looks clean to me," the Ghost said after a focused scan.

Trihn tossed the canister to shatter on the ground and moved back to the unopened crates. She cracked off one of the lids with the spear and set both aside. Just short of a dozen full fragile vials containing delicate blue jostled within soft packaging. Save a few with froth percolating through worn seals, the Ether swished like plasma-fluid surf inside the glass. "They wouldn't leave this much unattended."

Shakto followed the dirt-dragged trail back from the Captain to a curve in the stony walls of the gulley. The trail led him to a narrow separation in the rock face. "Trihn."

It was enough space to contort her body through. Scrapes ran from the edges of the split into a slithering dark tunnel. Trihn took a stone from the ground and rolled it in her hands, coaxing condensed smoothness from it with palms of Void-Light. She flicked the glowing sphere into the separation and watched it roll a few meters along a line before it skipped over the edge and fell steeply out of sight.

"You think it fell straight through the Reef?"

"I'd say no. That rope goes somewhere."

Trihn squeezed shallow breaths into her lungs with each shuffling step. It was all the stone pressing on her ribs would allow. She closed her eyes to keep instinctual panic in check and lurched forward with a final step to meet the precipice. The walls opened; her lungs filled. Line dangled beneath her feet. She grabbed the line and tested the solidity of the ground-spike holding it in place.

Several meters deep in the darkness, buzzing spelunking lights set a grizzly scene aglow. Three Vandals, two Dregs, and a Captain lay slain and lifeless and ripped agape—some residually twitching from Arc blade cuts. Near the Captain, two severed arms bled pools. A third arm, prosthetic, was pinned to an adjacent stone wall with a spear. Her breath trembled. She knew this violence. It was the only thing the pits had ever offered her.

"What did you find?" Shakto's voice reverberated down the shaft, preceding his descent. 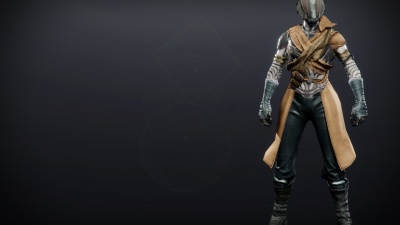 
Do Not Sell My Personal Information
Retrieved from "https://d2.destinygamewiki.com/mediawiki/index.php?title=Wild_Hunt_Vestment&oldid=84571"
Categories: