Detailed explanation on how to acquire Pathfinder's Tunic

Forged from the reinforced armor of fallen Corsairs to shepherd the lost as they no longer can.

Sjari shifted on the wooden operating table. Why must she be the first?

She probed the jelly-like substance smeared across her forehead as Elder Kalli entered the room.

"Don't touch that. It's an antiseptic… and a binding agent," Kalli said, placing a sizeable blue-crystal-adorned mask next to an assortment of scalpels, hooks, and erosion stencils on her back table. Each tool was etched with ceremonial iconography, and freshly sharpened.

"Normally, it takes years to become an Adept among our ranks… but the Queen's Wrath believes time is short. If you survive, these augments will expedite your training and enhance your abilities."

Kalli turned away to work a mortar and pestle. "You will need to learn to focus under duress. Remove your mind from this place. Sink into the cosmic, project out from yourself. There is no pain, no flesh, no nerves."

Sjari gripped the sides of the operating table and pressed her back flat, until no air existed between her and the surface beneath—until she felt herself a part of it. She told herself to ignore the grinding of the pestle and thought about how Petra had taught her to use the physical as a transitionary conduit to the Ascendant.

Sjari opened her eyes and released her grip as her meditation broke. "Yes, Elder sister. Give me a moment to focus, please," she pleaded, hastily gulping down the tea.

"You think my voice is sharper than this knife?" Kalli asked, lifting the scalpel from her back table. "Duress. You must push through it if you are to survive. Be strong, or you will die. This is your final test."

Sjari drank quickly and pressed herself to the table once more. She focused on her fingertips and the feel of the hand-worked wood. The grain formed diminutive pathways for her nails to trace; tiny patterns hidden away within the enormity that surrounded them, only revealed by shrinking one's perspective. She let herself drift.

Kalli threaded the thin metal edge directly through to the bone of Sjari's skull. A line of incision opened a wave of red. Searing penetration through the layers. Overwhelming electrified senses. They gave way to a calming sting in the discordant firing of nerves. A pattern. The texture. The split between what was and what could be.

In her mind's eye, Sjari saw the Ley Lines unfurl like budding petals of a living blossom. Nebula-like plumes of pollen. She let herself slip away until the pain of her flesh was only one of many choices before her. 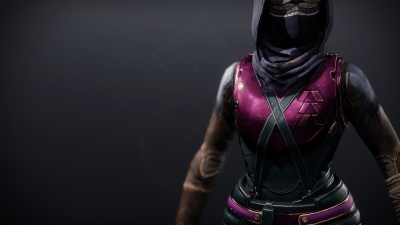 
Do Not Sell My Personal Information
Retrieved from "https://d2.destinygamewiki.com/mediawiki/index.php?title=Pathfinder%27s_Tunic&oldid=100922"
Categories: