Doom Fang Pauldron is a set of Exotic Gauntlets available to the Titan class.

"It was a Warlock who first worked out that the fangs could be used as some kind of conductive amplifier when specific light frequencies were run through 'em. I don't know the science. That's not for me. I just know they work. And in battle what works is what's best.

"Is it weird? Yeah. Maybe. Science fangs and space magic. But I've seen enough strange out there to understand normal ain't the norm. Anyway, the Warlock called 'em 'Bio-Conductive Trouble Breakers'. I call 'em 'Doom Fangs' 'cause of the fang, which is obvious, and then there's the doom we tend to inflict on a situation.

"Plus it just sounds cooler." 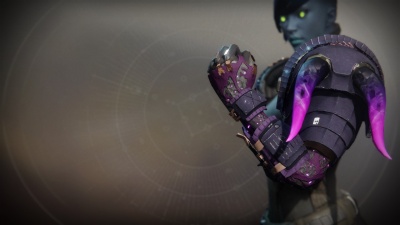