Physically, I am beneath the surface of Mercury. That is what Sagira's sensors say. The Vex hollowed out the planet, replaced its molten heart with cold right angles.

But that is not what I see.

An infinity of possible worlds, so perfectly simulated as to be indistinguishable from the experiences I once called "reality." I can touch them, taste them, pass lifetimes in them! They grow within this machine like fruit upon a tree—no, a forest of trees, its fractal expansion nigh unmeasurable.

I said that to Sagira and she replied, "Sounds like a challenge."

This Ghost of mine knows me too well.

It strikes me now that I could find in this Infinite Forest a reality in which Ikora accompanied me into its endless mysteries.

What an awful, destructive machine this is.

I must know everything about it. 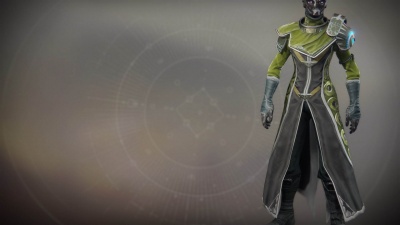 
Do Not Sell My Personal Information
Retrieved from "https://d2.destinygamewiki.com/mediawiki/index.php?title=Kairos_Function_Robes&oldid=66417"
Categories: