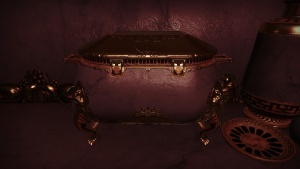 An Opulent Chest can only be opened by its corresponding

Opulent Key. When an Opulent Key is acquired, its inventory description will include a clue specifying a sector on the Leviathan (either Pleasure Gardens or Royal Pools), as well as a clue hinting at the chest's location within that area. Only one Opulent Key can be held at a time, so it is recommended to use it as soon as possible to continue receiving them as drops.

This chest sits in front of a massive golden statue of Calus's head. It sits on the opposite side of the room from the Royal Pools entrance.

Guarded by a loyal companion

This chest is on the ground next to the War Beast statue, to the left of the Egregore-covered Calus statue.

Entering from the Castellum, this chest is to the right of the giant Calus statue. It is inside the covered area near the exit to the Pleasure Gardens. It sits against the wall, near four black-and-gold columns.

At the feet of greatness

This chest can be found to the immediate left of the giant Calus statue.

Where water used to fall

From the Castellum entrance, this chest can be found in the area to the left of the giant Calus statue. It sits at the bottom of a dried-up waterfall.

Vestiges of Dread, and an

Opulent Weapons Focused Umbral Engram. The engram will immediately decrypt if the player's engram inventory is not full. It will contain one of four weapons, which are re-issued from the Season of Opulence. All of these weapons can drop with Deepsight Resonance and can be Shaped.

The following Crown of Sorrow upgrades can affect the rewards obtained from Opulent Chests: