Meltdown is a PvP Map.

Located on the northwest, Landing Pad is an initial spawn location. It's of strategic importance, as it contains Capture point C. On the east side, you will also find a Clash/Supremacy point of interest.

Awning is a long passageway on the right side of the map. It provides a lot of covers and is a high-traffic area since it's close to point B. If you are playing Countdown, you will find one of the two important points just left of the Center.

Inside is located on the north side of Meltdown. It provides a lot of covers and is divided into 3 small sections.

Plaza is an open area on the far east side of the map. It is an initial spawn area and contains Capture point A. Right next to it, there's a Hut which can be used to defend the position. Plaza is connected with Awning on the south and Hallway on the north. 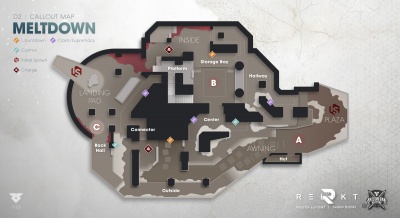