"Trust me, you don't want to be there when he lands."

Behind the cover of the crumbling stone wall, the Warlock looked up at the sky and frowned as thunder rolled in the distance.

"Rain," he grumbled, and felt strength flow through him as he concentrated and consumed the fiery grenade in his fist. "Just what we need."

The Hunter chuckled low beside him. "We'll be fine," she said, "and there will be no rain."

"'We'll be fine,'" mimicked the Warlock grimly. "They outnumber us, what, a hundred to one? We've got no backup yet. And—"

The Warlock held his palm out, expecting to feel a drop on his taut glove. "And can't you feel it? That energy in the air? A storm's coming."

"I said we'd be fine," the Hunter replied as she idly slid shells into her shotgun. "Backup's nearly here… and there will be no rain."

The air suddenly crackled around them. Sizzling fingers of Arc energy danced across the barrel of her weapon.

The Warlock scrambled backward. "If a storm's not coming," he cried, "then what the hell is that?"

Across the battlefield, the Titan landed in the midst of the enemy forces with a sky-splitting crash. 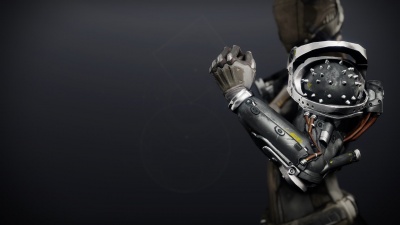