From Destiny 2 Wiki
Jump to: navigation, search
Javelin-4 is a PvP Map.

Javelin-4 is set in the Warsat Launch Facility zone on the planet Io. It was launched with the base Destiny 2 game as one of the initially-available Crucible maps.

Fuel is one of the two team spawn points on the map. It is an interior area on one side of the map that offers some great cover options. Additionally, during Clash and Supremacy matches, it holds one of the three Power Ammo spawn points.

During games of Control, Fuel holds one of the capture points on the map.

Glass is a major strategic area, despite its small size. It provides players with some great flanking routes. It also offers good angles for snipers that are looking to make a pick at Fuel.

It has two entry points and the pillar in the middle can prove to be a useful bit of cover in a firefight.

Inner Ring is a typically high-traffic area, due to its connection to five other zones of the map. It is a relatively tight half-circle corridor and, during games of Control, it is the only route in and out of Capture Point B.

During games of Clash and Supremacy, Inner Ring holds one of the three Power Ammo spawn points.

Station is a strategically important area that is only accessible from Inner Ring. During games of Control, it holds Capture Point B. However, its small size and low ceiling make it very hard to defend.

Players inside Station should keep in mind that they will be very vulnerable to splash damage. Additionally, a good team would probably shut both escape route down at the same time and even if that doesn't happen, both exits lead to the same area. This makes Station a death trap if players do not know how to defend it.

Rocket is the focal point of the entire map. In most cases, the most intense firefights happen here. The rocket in the middle serves as one giant piece of cover and players have plenty of options to disengage by falling back to either Inner Ring or Outer Ring.

Additionally, during games of Survival, if the two teams are tied, the winning Capture Point will be spawned in Rocket.

Stairs is a small area that runs between Generators and Inner Ring. It is a popular flanking route, but an unwise Guardian could easily be caught off-guard, due to the lack of cover in the area.

Generators is a relatively large interior zone on one side of the map. It provides several solid pieces of cover, as well as good angles for snipers looking to shoot towards Rocket and Outer Ring.

During games of Control, Generators holds one of the Power Ammo spawn points.

Outer Ring is a high-traffic area around Rocket. This makes it a very popular location for firefights as well. Such conflicts often include both players in Outer Ring and those in Rocket due to the many suitable firing angles between the two.

Pipes is a strategically important zone with three access points - one to each Fuel, Rockwall, and Outer Ring. It is mostly used as a sniper nest for players that monitor either one of the three adjacent zones, but it is also suitable for flanking unaware players and closing the distance between Guardians and their opponents.

Guardians should do their best not to engage in a firefight in the Rockwall zone. It is a good spot for sniping unaware enemies and it can prove to be a useful flanking route, but its relative lack of cover makes it dangerous for a regular fair fight.

Deck is a relatively-large exterior area. It is best used as a sniping position, but players should be aware that it's just as easy to get sniped. Guardians should make heavy use of the limited cover and avoid lingering in Deck for too long, or they risk getting flanked and/or sniped.

Center is a small zone that connects Outer Ring, Deck, and Pad. Reasonably-good players could easily defend it, turning this narrow area into a chokepoint. However, with heavy use of its fairly-generous cover options, Guardians could easily turn the tide of battle and push through Center.

During Survival matches, Center is the only zone where Power Ammo will spawn.

Pad is a large exterior area that also holds one of the team spawn points. It is quite hard to defend, due to the many good sniping angles towards it and the relative lack of cover in the zone itself.

That being said, Pad is of great strategic advantage during most matches. In Control games, it holds one of the Capture Points. During games of Clash and Supremacy, it is where one of the Power Ammo spawn points can be found.

B & A or C - Another reasonably balanced map. B control is key here. Once you have B and either A or C just focus on picking off the enemy team as they push towards B. B is a hellhole for grenades, pulses, spikes, vortex, voidwall, arcbolts, they can all do some serious damage here. Try to steer clear of the absolute centre of the map however, too many angles leave you in a potentially dangerous position. C is more in the open so A is probably the better point of the two to have, but not hugely different. 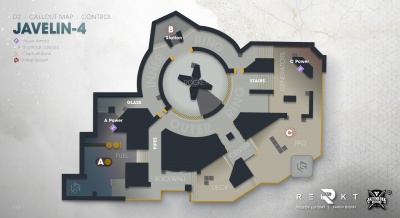 
Do Not Sell My Personal Information
Retrieved from "https://d2.destinygamewiki.com/mediawiki/index.php?title=Javelin-4&oldid=58881"
Categories: