From Destiny 2 Wiki
(Redirected from Battleground)
Jump to: navigation, search 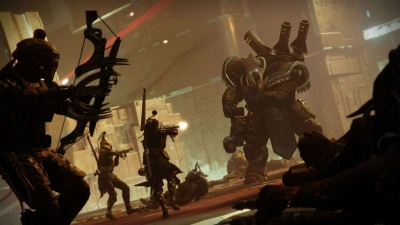 Battlegrounds are an Arena group activity released in the Season of the Chosen. In it, the Fireteams goal is to attack fortified Cabal and eliminate a Cabal commander. It managed to deliver that enthusiasts had been eagerly waiting for quite some time. Among the activities, Battlegrounds is the most recent addition and undoubtedly the most creative in terms of the matchmaking point of view. Once accessed from the Vanguard menu or via maps, Guardian players confront the raging hoards of Cabal adversaries through three phases of the combat, tasking the players to not only face the combatants but focus on completing a variety of side activities as well. Last but not least, the final phase features a proper boss fight that drops interesting loot alongside a distinct treasure chest.

The prominent reason behind the popularity of Battlegrounds is its PvE matchmaking activity, a striking resemblance to the Strikes in a way but not literally. Unlike the previous season, where killing enemies held significance and forced group activities for solo enthusiasts, Battlegrounds lets you team up with two other players and demands you to take a strategic approach towards clearing side objectives like destroying generators all the while dealing with non-stop enemies.

The waves of enemies lead to Champion spawn that players must deal with before making further progress. The cycle repeats three times in total, meaning you will need to kill the Boss three times alongside hundreds of Cabal troops. Overall, Battlegrounds gameplay is rather quick-paced and more straightforward than most Strikes, keeping the action happening and dropping valuable loot at the same time.

The primary source of obtaining loot in Destiny 2 Season 13 is by undertaking Battleground activities. Aside from players receiving the standard loot after the fight is over, there is an additional reward chest that unlocks only with the help of an heirloom called the Hammer of Proving. Amidst the H.E.L.M., the latest resource known as Cabal Gold let the players forge Challenger Medallions for equipping into the hammer. It allows the players to target specific loot items at the Prismatic Recaster. There are also options for upgrading the Hammer of Providing for certain perks that come with War Table Reputation.