Tilt Fuse is an Exotic Sparrow.

It would only take one shot. That ridiculous ceremonial armor had 10 weaknesses that Bracus Zahn could spot without even looking that closely. One good shot, and everyone else would abandon this foolish crusade on this miserable planet—

"This is all of them? The most advanced weapons you have?"

Zahn tried not to lose his temper. "Would I have made the trip all the way to this 'throne room' without them?"

It was a lie, of course, but this puffed-up "Dominus" didn't need to know about the experimental vehicles Zahn had been working on since—

"Were I you, Zahn, I would think hard before giving so flippant an answer."

This was the "Consul" who had deposed Zahn's best customer. Zahn didn't turn around as he said, "If I were you, roach, I would think hard before wasting the time of the only real weapons supplier you've got."

Growls from all over the room, but Zahn smiled. They needed him. And they knew it. 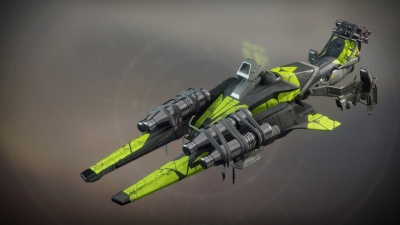