Eternal Recurrence is a Exotic Sparrow.

"The faster you go, the sooner you come back around." —Jolyon Till

Petra Venj found Jolyon on the range, as she'd expected. A lone figure, lying face down on the ridgeline, sighting a barely visible target on the far side of the ravine.

"You never really needed a spotter, did you?"

"No," Jolyon replied, squinting up at her, "but I always liked the company." He offered her a rangefinder. "Care to join me?"

Petra settled down beside him, and sighted the next target.

Jolyon pressed his eye to The Supremacy's massive scope. "I heard he's back," he said.

"Then you heard wrong." Petra squinted through the rangefinder. "You know how it is with Guardians. He goes by 'Crow' now."

Jolyon snorted. "Ironic. Only Uldren could make immortality a demotion."

Jolyon let out a long, slow exhale. Then: a deafening BOOM as The Supremacy kicked. Petra didn't bother to check the target.

"He took a lot of abuse after he rezzed," she said, breaking the silence before it could fully settle. "And never knew why. Gave him a bit of… humility. If you can believe it."

Jolyon lifted his head, shifting his focus from the scope to Petra's inscrutable expression. He raised an eyebrow. "I'd like to see that for myself."

"I know." Petra pressed her lips together in sympathy. "That's why I'm here. Mara thinks it's best if we limit his contact with others."

"Keeping him in her pocket, huh? Uldren might have changed, but it sounds like Queen Mara is the same as ever."

Petra's tone hardened. "Be that as it may, you've got your orders. Stay away."

"It's fine," Jolyon said with a smile. It did not reach his eyes. "I've gotten used to Uldren being dead. Probably best he stays that way." 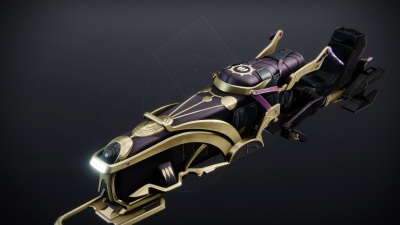 Do Not Sell My Personal Information
Retrieved from "https://d2.destinygamewiki.com/mediawiki/index.php?title=Eternal_Recurrence&oldid=100195"
Categories: